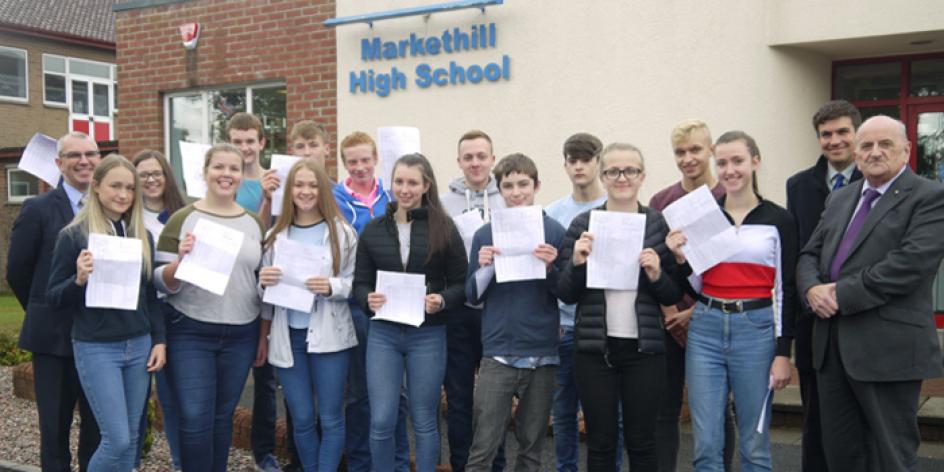 Highlights include a record GCSE English Language of 83% at A*- C; an excellent Maths pass rate of almost 80% at A*- C and 100% pass rates for GCSE English Literature, Spanish, home economics, physical education and music.

The results come on the back of the school’s inspection report last year, which concluded that “the proportion of pupils achieving five or more GCSEs or equivalent, including English and Mathematics, at grades A* to C is now significantly above the average for similar schools”.

These are some of the best results in the school’s history,

We are absolutely delighted and I would pay tribute to the dedication, hard work and sheer professionalism of the staff here at Markethill High who always go above and beyond to ensure our pupils are exceptionally well catered for, both academically and pastorally. The results are also a clear vindication of this school’s unrelenting priority on the development of high-quality learning and teaching in the classroom.

The top performer was Samuel Foster, who attained 6 ‘A*’ and 4 ‘A’ grades, followed closely by Amy Kennedy who achieved 5 ‘A*’ and 5 ‘A’ grades.

Behind every single grade is a story,

A number of our pupils had many challenges during the course of their GCSE studies including ill health and bereavement. I would want to convey my utter pride and admiration at how those pupils have achieved.

However, Mr Maxwell believes that pupils “need and deserve” access to sixth form education at Markethill High School, saying it would

avoid inequality, uncertainty and fracture at the crucial age of 16.