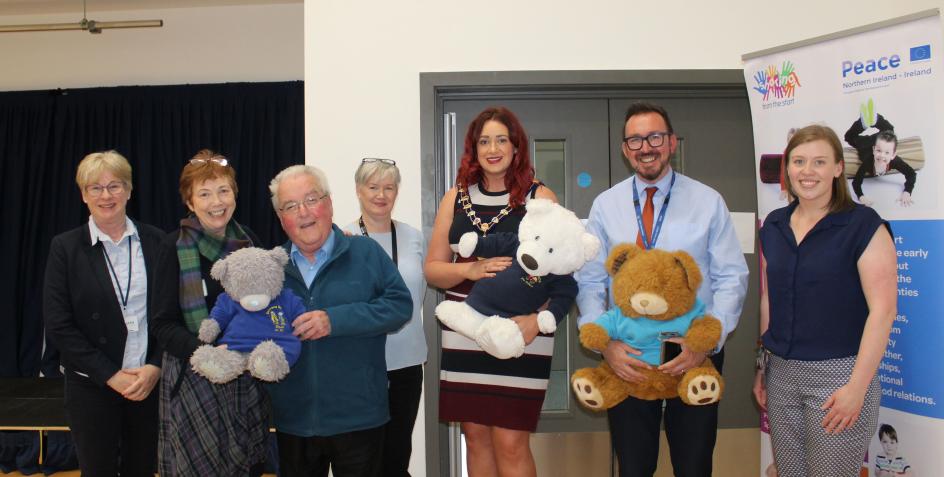 Celebration of inclusion and diversity in Ballymena

Ballymena Nursery, Castle Tower Nursery Unit and First Steps Community Playgroup hosted a celebration of inclusion and diversity concert for the pupils’ parents and families in May 2019.

The event was organised as part of their Peace IV funded project Sharing from the Start, and special guests, including Councillor Lindsay Millar, Mayor of Mid and East Antrim Borough Council, Rosemary McKee from the Education Authority’s Inclusion Service, and PJ McAvoy vice Chairman of Ballymena Nursery School Board of Governors, were able to enjoy musical performances from the pupils of all three settings.

The highlight of the celebration of inclusion and diversity held on 15 May was the children’s performance of the Scottish folk song ‘My Bonnie lies over the ocean’ which the children, with the support of their teachers, had rewritten to embrace the excellent sharing that has taken place.  The new song has become a favourite of all of the children:

“In our nursery we have many children

We're different but really the same

In our nursery we have many children

The cross-community partnership has involved joint-curricular sessions focusing on music and movement, and allowed the three organisations to work together to both enhance educational outcomes and build good relations.

Jacqueline Coulter, Principal of Ballymena Nursery commented on the therapeutic benefits of music on all pupils and particularly its impact on children with special educational needs and children with English as an additional language.

“It was wonderful and humbling to watch how quickly our young children quite naturally began signing using simple Makaton signs to each other to say hello or thank you as well as learning the accompanying signs for their songs,” she said, “although it was a commonly shared joke among all of the ‘younger members’ of staff when I inadvertently got mixed up with my signs for pig and nursery!”

During the joint sessions children were able to work together on making their own musical instruments from recycled materials and they enjoyed the social aspect of having their daily snack together as they happily ate and chatted together.

In addition, the joint sessions allowed parents of children from each setting to engage with one another during fun activity days and share in their children’s learning, as well as enabling leaders of each setting to learn from one another’s practice.